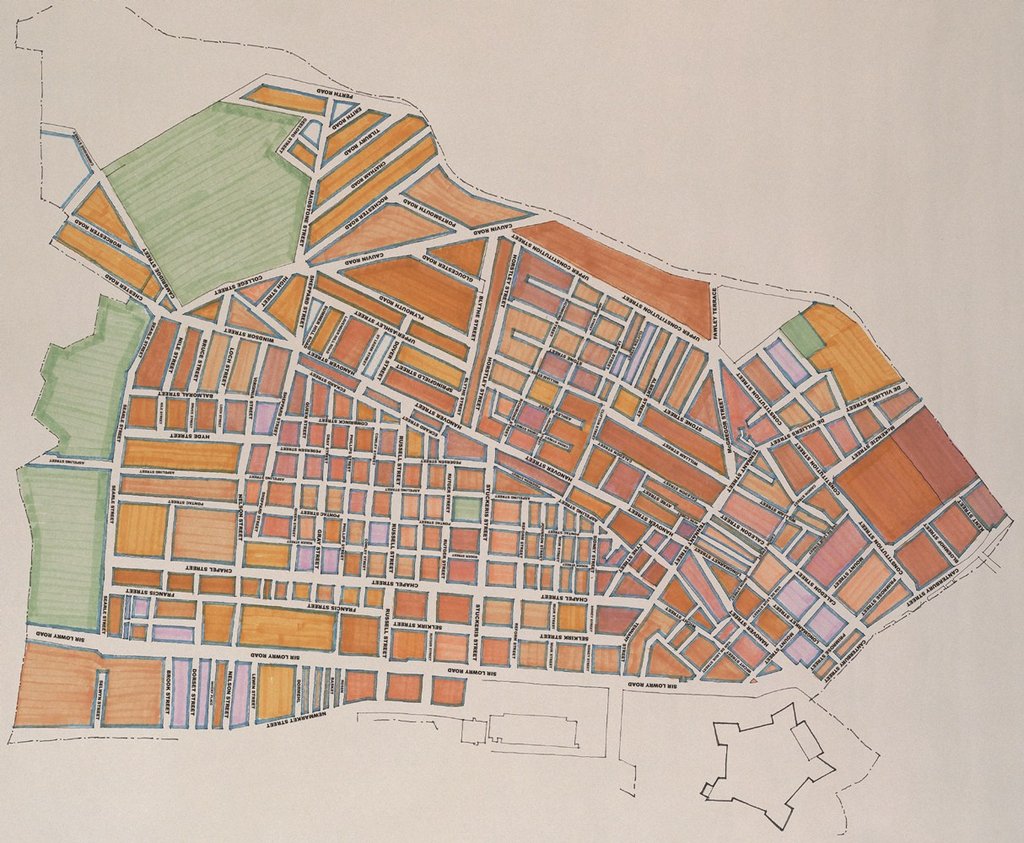 District Six is located in downtown Cape Town, right behind the City Hall of Cape Town. Thousands of vehicles drive on National Route N2, one of the main highways of South Africa, which passes through the district. The only university campus in Cape Town downtown area, Cape Peninsula University of Technology – Cape Town Campus, sits in the center of District Six.

However, wastelands near the university look like scars of the delicate city. The bustling scene stops abruptly with gravel and weeds. The skyline of modern buildings is fractured by lifeless open spaces and dilapidated houses.

These are the remnants of the forced removals which took place in District Six in the 1970s. Diverse people including Africans, Indians and whites once resided in the area from late 19th century to mid-20th century. But, much of District Six was sacrificed as a result of segregation under the Apartheid regime.

Since the 17th century, European colonists coveted South Africa. The Cape of Good Hope, the Southern tip of Africa, was once the starting point for ambitious sailors with dreams of arriving in the mysterious East. South Africa was successively colonized by the Dutch in the 17th century and by the British in the 19th century. The discovery of diamonds in the 1860s in Kimberley and the discovery of gold in the 1880s in Witwatersrand and Johannesburg only made the country more attractive to colonists.

People from around the world found a home in the area. District Six, one of the main municipal districts in the center of Cape Town, housed diverse people from Dutch colonies in Indian, Indonesia and Malaysia. Many Muslims also dwelled in Cape Town, and traveled from Indonesia, the country with the largest Muslim population in the world.

“They were opposed to the Dutch rule in the east,” said Professor Harold Herman, the dean emeritus of the Faculty of Education at the University of Western Cape. “The Dutch put them on the ships going to Holland via Cape Town. They were banished to Cape Town.”

The wealth of religious diversity developed into inclusiveness rather than hostility, former resident Noor Ebrahim said. Ebrahim grew up in District Six and went to a mosque in northern District Six with area families as a child. Today, he works in the District Six Museum and still goes to the mosque from his childhood every day.

“We loved each other in District Six,” Ebrahim said. “When my Christmas comes, they call it Eid. All my friends, Jewish, African, Christian, Hindu, you name it, they would put on a fez, and they would go with me to my mosque. I think that made District Six such a great place.”

Nightmare in the 1950s: Apartheid government classifies residents by race

The 1950s marked the era of apartheid in South Africa. The government began to racially classify all residents in the country. South Africans were declared white, black, Asian or colored. Most residents of District Six came to be classified as so-called colored or mixed blood. Legislation including the Population Registration Act, Bantu Education Act, Group Areas Act and Immorality/Mixed Marriages Act during this time was designed to segregate Europeans from non-Europeans.

“Within that apartheid framework, they thought society would be contaminated by the colored people,” said Joe Schaffers, former resident of District Six and education officer at the District Six Museum.

Classification was arbitrarily based on appearance and judged by government officials. Herman, for instance, spoke Afrikaans and was not initially classified under the system. In 1951, when he was eight years old, he went to have what was called the pencil test.

Officials used the test as a way to determine a person’s racial grouping. If a pencil could be run through a person’s hair with ease, a person would be declared white. If the pencil became stuck in a person’s hair, they would be called colored or African. Herman and his parents were categorized as “Cape Colors” as a result of the test.

The subjective nature of the racial groups allowed some people to manipulate the system. Many people took the pencil test in an attempt to be labeled as whites since the apartheid system afforded special privilege to this group. White South Africans were given better jobs, education and housing.

Although many of Herman’s family members were labeled as colored, his uncle  married a white woman and was classified as white.

“Many of us rejected that,” Herman said.  “They denied their own roots and took on the identity of oppressor, which was the white people. In my family on both sides, there were divisions and people who never really met.”

Forced removal in 1970s: Residents moved from Cape Town to the Cape Flats

The apartheid government took further steps to divide the population following this period of population classification. On Feb. 11, 1966, the government declared District Six to be a white-only residential area under the Group Areas Act. Around 60,000 non-white residents of District Six were forced to move to townships outside of the city center. Residents were moved into the townships according to their racial classification. These townships were located in the dry and dusty Cape Flats area outside the city and often had poor infrastructure.

As a result of these acts, residents could only go to schools, churches and other public spaces reserved for their racial groups. Skin color and bloodlines determined the boundaries of a person’s life. If a white man wanted to visit his wife who had been classified as “colored,” he had to apply for a permit to even enter a colored township, said Schaffers.

Most of District Six’s residents were classified as colored under apartheid. As a result, most residents were affected by the forced removal. Apartments, churches and shops were leveled to the ground in the years after the Group Areas Act. New buildings such as the Cape Peninsula University of Technology were built upon the destroyed buildings, including Ebrahim’s home.

“If you owned property in these areas, they’d ask you to move and offer you a place of lower value,” Schaffers said. “If you refused, they would take this property and offer you an even worse offer than the first one.”

Once people were relocated to the Cape Flats, the government failed to sufficiently support the area’s explosive population. Basic necessities like electricity could be scarce, and the townships breed poverty and gangsters.

“It’s not meeting the needs of people living there,” said Chrischené Julius, manager of Collections in District Six Museum. “It becomes a space that really becomes a symbol as what the Group Areas Act actually achieved.”

Democracy after 1994: Still a long way to go

Society has gradually improved since apartheid ended in 1994. The current government has pledged to create access to good education and jobs for all people.

Akhona Landu is one example of success under the new government. Landu was born in 1992 in the Cape Flats. She grew up without electricity and spoke Afrikaans. Her parent sent her to Cradock High School, a Model C school in the Eastern Cape. Model C schools hold students to especially high standards and are largely aimed at white students. Landu went on to study English and currently attends the University of the Western Cape.

“Even though the old generation didn’t get the opportunity to education themselves, they understand how important it is,” Landu said.

Landu is now the Secretary General of the university’s Student Representative Council and helps to advocate for students’ interests. The organization fights for equal access to education, especially for those who came from a disadvantaged area.

However, the influence of apartheid can’t disappear overnight. The current generation is still growing up in an era of classification. The mindset of segregation remains ingrained.

“It’s 20 years into democracy,” Julius said. “On some level, I think we are very young as a democracy. I think lots of people are still sitting in the legacy of apartheid.”

The District Six Museum was established in December 1994 to preserve the memory of District Six and to remember the lessons of segregation. The museum plays a role of education and shows people that the city center is a public space for all people, not a specific race.

“The apartheid racism is not something that only white people show towards black people” Julius said. “It’s part of our culture.”

Although the government has issued the Land Restitution Act as a measure to allow former residents to move back into the area, execution is still lagging. Many former residents have died, complicating how ownership of the land should be determined. Living expenses in the area in the area are also high, and many who have lived in the Cape Flat area for decades cannot afford to move back to their former lands. The act also fails to address where current residents should relocate and how land covered by new buildings can be allocated to former residents.

From 2004 until today, only 139 families have moved back to District Six. Yet, there are still 1,260 validated claims to land in the area, said Abubaker Brown a former District Six resident and an ex-resident volunteer at the District Six Museum.

Brown lived in District Six for 24 years. People feel nostalgic when they think of the inclusive and cosmopolitan atmosphere of the former District Six area, he said.

All photos used courtesy of the District Six Museum and Sarah Darby.